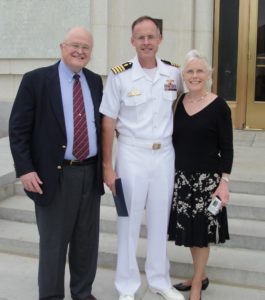 From left to right: Dr. Donald E. Ralph (former director of Eastern State Hospital in Lexington, KY, and a former member of the faculty at the University of KY), CAPT John Ralph (United States Navy—retired), and Margie Ralph

Dr. Donald E. Ralph—who has been credentialed by the National Register since 1975—has been a leader in clinical psychology and a forceful advocate for the profession, particularly in the Veterans Administration.  Among his other accomplishments, one of Dr. Ralph’s many successful children, John, recently completed a highly successful career as a Navy clinical psychologist.  John entered the Navy as a line officer, and later transitioned to a career as a clinical psychologist.  He served in numerous commands and was the Specialty Leader for Navy Clinical Psychology.  John retired in June as a Captain from his most recent position as head of the Midshipman Development Center at the US Naval Academy.  We asked Don and his son to reflect on their careers and the how Don shaped his son’s choice of careers.

Dr. Ralph’s reflection on influencing his son’s choice to focus on psychology

The University of Notre Dame was our shared educational background. I was able to go there because of my tennis scholarship. It was a great experience, and I talked about it a lot when John was growing up. I was a math major there but eventually chose psychology.   This was 1961, when clinical psychology was so young that Notre Dame had no psychologist on campus from whom to get advice.

It was during my time at Eastern State Hospital that John graduated from Notre Dame.  I suppose that during those years the dinner table conversations centered in on some of the unusual occurrences that happened in the hospital. Since Eastern State Hospital was the second oldest state hospital in the country, and the oldest that had functioned since 1824 in the same location, there were a lot of very interesting occurrences to discuss around the dinner table, and this may have helped shape his career choice.

My father’s career in psychology had a significant impact on me. He had quite a career, serving as the director of two state mental hospitals (Kentucky State Hospital in Danville, KY, then Eastern State Hospital in Lexington, KY). He also served for many years on the Kentucky Board of Psychology and as Deputy Commissioner for the Kentucky Department of Mental Health. He is in the Kentucky Psychology Hall of Fame! As a child I visited the hospitals where my dad worked, and I was able to see first-hand the devastating impact of severe mental illness, as well as the heroic efforts of those who provided treatment for it. The impression I had as a child was that those in this line of work were helping others in a very meaningful way, and in fact were dedicating their professional lives to helping those who many people were not inclined to help. It seemed like an extremely honorable profession, often thankless, but deeply important and meaningful.  I’m very proud to have contributed to the same noble profession as my father.